What WE Know About the Future of Medicaide

Posted by danetteoneal1 on July 26, 2012
Posted in: Economy. Leave a comment 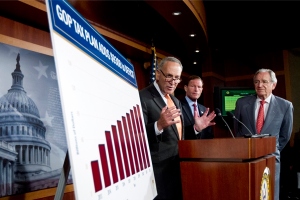 The parts of the law that pertain to expanding health insurance coverage will cost $84 billion less over the next 10 years than if the Medicaid expansion, which was to extend insurance coverage to 16 million Americans, has been compulsory for every state. Some states will expand their Medicaid programs as the ACA originally intended; some will expand their Medicaid programs less; others will expand their programs later than the initial timetable of 2014; and some states will forgo an expansion and maintain their current Medicaid programs. According to the CBO, this means about 6 million fewer Americans will be able to get health insurance through Medicaid. About half of these people will instead get federal subsidies to buy private insurance, which is more expensive than Medicaid. But the other half will remain uninsured, offsetting the extra cost and saving the government money in the end. In other words, it will cost less to do less.

The 3 million Americans who will now stay uninsured because of the new Medicaid-opt out will be among the poorest Americans–mostly poor non-parents and poor parents who live in states that already have extremely limited Medicaid eligibility rules. Click on the picture to read the entire article.