HE’S OUT OF CONTROL!!! John Boehner Yelled At Frank LoBiondo Over Sandy Aid: “I’m not meeting with you people”!

….yelling at a member of his own caucus on Tuesday night, after lawmakers from New Jersey and New York repeatedly pressed him to bring the Superstorm Sandy relief bill to the floor for a vote. 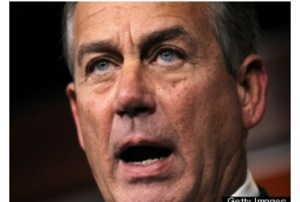 2 million, 700 hundred thousand gun purchases in December post the school shootings! Ridiculous, so I guess it really is going to be “The OK Corral” real soon.

Posted by danetteoneal1 on January 2, 2013
Posted in: politics. Leave a comment

Posted by danetteoneal1 on January 2, 2013
Posted in: Uncategorized. Leave a comment

Last night the Senate passed the highly anticipated “fiscal cliff” bill which included an extension of the Mortgage Forgiveness Debt Relief Act. Had Congress not acted, the tax code would have reverted to its pre-2007 treatment of mortgage principal reductions or cancellations by lenders, whether through loan modifications, short sales, deeds-in-lieu or foreclosures: All principal balances written off would be treated as ordinary income to the homeowners who received them.
Example:  if a lender wrote off $100,000 of debt to facilitate a short sale, the seller would be taxed on that $100,000 at regular marginal rates, just as if he or she had earned it as salary.

A return to taxation of principal reductions would have disrupted short sales in 2013, and would have encouraged more distressed owners to opt for foreclosure and bankruptcy.

The fiscal austerity crisis has been temporarily averted, but given the apparent animosity between the current leaders of Congress its a miracle that any deal was made at all.  As they arrived for a much-hyped meeting with the President last Friday afternoon, Speaker of the House John Boehner spotted House Majority Leader Harry Reid approaching just steps from the Oval Office. According to “multiple sources,” Boehner pointed his finger at Reid and without any other fanfare said, “Go f*** yourself.” When Reid asked him what he was talking about, Boehner simply repeated his curse and moved on.

To be fair to Boehner, just hours earlier Reid had called him a dictator on the floor of the Senate, telling the whole country in a widely-televised speech that the Speaker cared more about protecting his job than doing what was right for the American people. And it won’t be the first nor the last time a Congressperson swore a fellow lawmaker. Still, it maybe helps explain why the two sides seem more intent on destorying each other than actually passing useful laws.

“Republicans backed out on their promise to pass a bill providing aid for the victims of superstorm Sandy.”

A Financial Plan for you Home, Part 3

Posted by danetteoneal1 on January 2, 2013
Posted in: Home Ownership. Leave a comment

Repairs and renovations: By choice or necessity: Freddie Mac and other authorities say as part of your home financial plan, you should be prepared to spend 1% to 3% of the market value of the home annually on maintenance. To be extra-prudent, open a savings account and make regular payments until your account reaches 1% to 3% of your home’s current value.

Start with the inspection report you received when you bought the house. Did the inspector indicate that you would need a new roof in five years? A new furnace in 10? Keep a log of your major appliances’ age so you can estimate when they’ll need replacing. Some estimated life spans:

Consider ongoing non-emergency maintenance, too. Resist the home equity loan to take care of everything. That just defeats your efforts to pay off the mortgage early. Separate out what you want from what you need. A $50,000 kitchen remodel is nice, but you’ll recoup only 76% of the project cost your home’s resale, according to Remodeling magazine.

Posted by danetteoneal1 on January 2, 2013
Posted in: Uncategorized. Leave a comment

In 2012 nature and the mad nature of some human beings caused us to wonder how can we go on. From super storm Sandy to the Colorado movie house shooting and the massacre at Sandy Hook Elementary School, we have been pressed to find some answers to the question, why, me why us, why now? As we come into 2013, we bring with us the need to find answers and the hope to find what can we do to prevent the recurrence of these despairing occurrences. I think we must commit to a commitment to all human beings and a decision to accept our responsibility to nature’s outpouring and human misbehavior. I wish that we could say with Horace Mann that each of us should be “ashamed to die until you have won some victory for mankind.” I think we must surrender the despair of unexpected cruelty and extend the wonder of unexpected kindnesses to ourselves and to each other. 2013 can bring us the chance to be kind to each other and kind to ourselves. We deserve each other and each other’s generosity.