9 Reasons Christopher Columbus was a murderer, tyrant, and scoundrel: 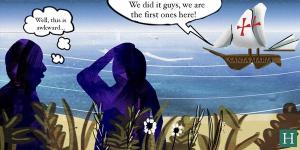 2) On Hispaniola, a member of Columbus’ crew publicly cut off an Indian’s ears to shock others into submission

Hispaniola, now divided between the Dominican Republic and Haiti. (NASA/JPL/SRTM)

After an attack by over 2,000 Indians, Columbus had an underling, Alonso de Ojeda, bring him three Indian leaders, who Columbus then ordered publicly beheaded. Ojeda also ordered his men to grab another Indian, bring him to the middle of his village, and “‘cut off his ears’ in retribution for the Indians’ failing to be helpful to the Spaniards when fording a stream.” (Bergreen, 170-171)

3) Columbus kidnapped and enslaved over a thousand people on Hispaniola- According to Cuneo, Columbus ordered 1,500 men and women seized, letting 400 go and condemning 500 to be sent to Spain, and another 600 to be enslaved by Spanish men remaining on the island. About 200 of the 500 sent to Spain died on the voyage, and were thrown by the Spanish into the Atlantic (Bergreen, 196-197).

4) Columbus forced Indians to collect gold for him or else die- Columbus ordered every Indian over 14 to give a large quantity of gold to the Spanish, on pain of death. Those in regions without much gold were allowed to give cotton instead. Participants in this system were given a “stamped copper or brass token to wear around their necks in what became a symbol of intolerable shame” (Bergreen, 203).

5) About 50,000 Indians committed mass suicide rather than comply with the Spanish-The Indians destroyed their stores of bread so that neither they nor the invaders would be able to eat it. They plunged off cliffs, they poisoned themselves with roots, and they starved themselves to death. Oppressed by the impossible requirement to deliver tributes of gold, the Indians were no longer able to tend their fields, or care for their sick, children, and elderly. They had given up and committed mass suicide to avoid being killed or captured by Christians, and to avoid sharing their land with them, their fields, groves, beaches, forests, and women: the future of their people.

7) Columbus was also horrible to the Spanish under his rule- While paling in comparison to his crimes against Caribs and Taino Indians, Columbus’ rule over Spanish settlers was also brutal. He ordered at least a dozen Spaniards “to be whipped in public, tied by the neck, and bound together by the feet” for trading gold for food to avoid starvation. He ordered a woman’s tongue cut out for having “spoken ill of the Admiral and his brothers.” Another woman was “stripped and placed on the back of a donkey … to be whipped” as punishment for falsely claiming to be pregnant. He “ordered Spaniards to be hanged for stealing bread.”

8) Settlers under Columbus sold 9- and 10-year-old girls into sexual slavery– This one he admitted himself in a letter to Doña Juana de la Torre, a friend of the Spanish queen: “There are plenty of dealers who go about looking for girls; those from nine to ten are now in demand, and for all ages a good price must be paid.”

9) Indian slaves were beheaded when their Spanish captors couldn’t be bothered to untie them.- Benjamin Keen, a historian of the Spanish conquest of the Americas, noted that multiple sources confirmed accounts of “exhausted Indian carriers, chained by the neck, whose heads the Spaniards severed from their bodies so they might not have to stop to untie them.”