Did you know that the federal minimum wage is 24 percent lower than it was in 1968 even though U.S. productivity has more than doubled? That’s a big problem for America’s low-wage workers. And it deprives Main Street businesses of the income these workers would have spent on local goods and services.

Thanks to crucial input from EPI researchers, the Raise the Wage Act establishes automatic increases in the minimum wage starting in 2021 to keep pace with rising wages overall. This means that workers will receive annual raises without the need for future congressional action.

If passed, the Raise the Wage Act would benefit 32 percent of wage-earning women, 37 percent of African American workers, and 40 percent of Hispanic workers. Three-fourths of all Americans—representing all demographics—support raising the federal minimum wage to over $12 an hour. This is a tremendous opportunity to raise America’s pay. It’s a bold step toward ensuring that American prosperity is broadly shared.

The Economic Policy Institute Policy’s Center has been providing critical research to members of Congress as well as activists on the ground who are fighting for a stronger minimum wage. Join us in our fight to increase workers’ wages and create an economy that works for all, not just the wealthy and large corporations.

On Fighting The Struggle: “Struggle is a never-ending process. Freedom is never really won, you earn it and win it in every generation.” Coretta Scott King

Posted by danetteoneal1 on April 28, 2015
Posted in: Uncategorized. Leave a comment

Posted by danetteoneal1 on April 28, 2015
Posted in: Home Ownership. Leave a comment

Atlanta BeltLine, Inc. is teaming up with local lenders through the Federal Home Loan Bank of Atlanta to improve affordable homeownership opportunities in Atlanta BeltLine neighborhoods. Find out if you qualify for assistance of up to $45,000 now!
How It Works:
The Atlanta BeltLine Housing Initiative Program offers special financing on home purchases and renovations in two ways:
Buy a Home
Supports homebuyers with downpayment assistance for up to 20% of the purchase price of a home.
Rehab Your Home
Supports homeowners whose homes are need of repair with up to $25,000 in renovation funding.
Income Eligibility

“This” is bigger than the young man who died in police custody, I don’t support rioting or violence of any kind, but you have to see this latest event in the context it should be in. I am a social-scientist and training has taught me to analyze this another way. What I see is another vulnerable ignored population of people who at this point have not learned any other way to cry out, moreover, their cries have been suppressed up until now. What I am hoping for is meaningful public policies, implemented immediately to deter the unnecessary deaths of any minority, diversity training, firings, an a sensitivity to the fact that “all lives matter”. No one is immune… this could have been one of our children, who has never been in any type of trouble or been arrested, but picked out because of how he looks, or the car he is driving. Lord help us.

Posted by danetteoneal1 on April 28, 2015
Posted in: Uncategorized. Leave a comment

Llyod Dennis: It is not useful to judge. There is a difference of perspective between those who feel they have something to lose and those who don’t. These acts are not done to accomplish anything, they are about throwing over the table, about being so sick and tired that jail or dying don’t matter,one a family reunion the other the ultimate end of anger and frustration. Young people feeling like they are going to kill us or put us in jail anyway aren’t thinking about what “we” have to lose. They’re just saying “F__k it!”. So what brings children to such a state of hopelessness that they just don’t care about anyone’s lives or futures including their own. That is the issue!

What happened in Baltimore yesterday had very little to do with Freddie Gray….

It was a culmination of decades of neglect, lack of opportunity, and a system that made criminal enterprise as desirable an alternative as any other…There is plenty of blame to go around, the education system, the government (city, state, and local), the police department, and the community itself….

If you live near a major American city with pockets of poverty, that city is one injustice from burning if we don’t work together to find solutions…Don’t think it can happen in your city??? All was “well” in Baltimore a week ago..

On Activism & Politics: “Freedom and justice cannot be parceled out in pieces to suit political convenience. I don’t believe you can stand for freedom for one group of people and deny it to others.” Corretta Scott King

Posted by danetteoneal1 on April 27, 2015
Posted in: Uncategorized. Leave a comment 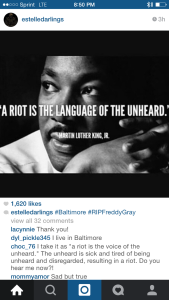 FOR ALL MY PUBLIC ADMINISTRATION (PAD) STUDENTS YOU WOULD LIKE THIS: Where the States Got Their Names

Posted by danetteoneal1 on April 27, 2015
Posted in: Uncategorized. Leave a comment

Posted by danetteoneal1 on April 24, 2015
Posted in: Uncategorized. Leave a comment

From Cornell William Brooks, President and CEO:
“We applaud the U.S. Senate for the historic confirmation of Loretta Lynch. She will serve as a relentless defender of the rights of all Americans. She will lead in situating the U.S. Department of Justice as our country’s enforcer of our civil rights. As an attorney with extraordinary depth, breath and length of service, in both the public and private sector, Ms. Lynch has successfully managed some of the most complex, diverse, and important cases in our country earning the trust and respect of those she serves. For 15 years she served as a prosecutor in the U.S. Attorney’s Office for the Eastern District of New York, the federal prosecutor’s office that covers nearly 8 million people in Brooklyn, Queens, Staten Island, and Long Island, New York. Under her leadership, Ms. Lynch’s office has vigorously defended the nation against terrorism and organized crime.  She successfully convicted terrorists including individuals who plotted to bomb the Federal Reserve Bank and the New York City subway system, and she has prosecuted some of New York’s most violent and notorious gang members. Her dedication to protecting civil rights and ensuring equal justice is deeply ingrained. Her commitment to public service is unwavering, as is her focus on improving the criminal justice system, recognizing that there is still much more work to be done to make it smarter and fairer. Ms. Lynch will lead the U.S. Department of Justice, and the United States, with an integrity and strength that is sorely needed at this time.”

Posted by danetteoneal1 on April 24, 2015
Posted in: Uncategorized. Leave a comment

From Roslyn M. Brock, Chairman of the National Board of Directors:
“The confirmation of Loretta Lynch by the U.S. Senate is a historic and much needed victory. The American people deserve a strong and fearless advocate to protect their civil rights. Ms. Lynch has a reputation for fairness and justice. After more than 165 days and thousands of calls and letters from concerned citizens, Ms. Lynch’s confirmation is a long overdue vote in the right direction. The NAACP looks forward to working with Attorney General Loretta Lynch as she begins to address the nation’s law enforcement policies that have been severely tested. As the nation’s top prosecutor, we are confident she will lead with both courage and distinction.”

Posted by danetteoneal1 on April 23, 2015
Posted in: Uncategorized. Leave a comment

Posted by danetteoneal1 on April 23, 2015
Posted in: Uncategorized. Leave a comment

Why Renters May Be in Trouble-  MARCH 17, 2015 – The gap between rental costs and household income is widening to unsustainable levels across the country. As more renters face steeper costs, it may put them even further away from home ownership, according to a new study released by the National Association of REALTORS®. NAR evaluated income growth, housing costs, and changes in share of renter and owner-occupied households over the past five years in metropolitan statistical areas across the U.S.

Over the last five years, a typical rent rose 15 percent, while the income of renters grew by only 11 percent, according to their research.

“The gap has worsened in many areas as rents continue to climb and the accelerated pace of hiring has yet to give workers a meaningful bump in pay,” says Lawrence Yun, NAR’s chief economist.

New York, Seattle, and San Jose, Calif., are among the cities where combined rent growth far exceeds wages, according to the survey.

“Current renters seeking relief and looking to buy are facing the same dilemma: Home prices are rising much faster than their incomes,” says Yun. “With rents taking up a larger chunk of household incomes, it’s difficult for first-time buyers – especially in high-cost areas – to save for an adequate down payment.”

Meanwhile, those who were able to buy a home in recent years have been insulated from the rising housing costs since they were able to lock-in a low 30-year fixed-rate mortgage with a set monthly payment, according to NAR’s study. As such, home owners were able to grow their net worth as home values increased and their mortgage balances went down.

“The result has been an unequal distribution of wealth as renters continue to feel the pinch of increasing housing costs every year,” according to NAR’s study.

The markets that have seen rents rise by the highest amounts since 2009 are:

“Many of the metro areas that have experienced the highest rent increases are popular to millennials because of their employment opportunities,” says Yun.

The key to relieve housing costs: Builders need to ramp up the supply of new-home construction, according to Yun. He estimates that housing starts need to rise to 1.5 million. Over the past seven years, housing starts have fallen far short from that historical average – averaging about 766,000 per year.

“With a stronger economy and labor market, it’s critical to increase housing starts for entry-level buyers or else many will face affordability issues if their incomes aren’t compensating for the gains in home prices,” Yun says.